"Now everyone can drive a Volkswagen Campervan"

Mango is the nickname of our 4th VW campervan. Why Mango? Simply because of the orange color. Mango is also one of our family favorite fruits. This campervan is a replica of VW Type 2 T1 Splitbus, built from VW Type 2 T2 Brazilian bus. The campervan interior is different than Deep Purple.
It has wall-to-wall rock-n-roll seat so it is wider; can accommodate up to three adults seating comfortably, or four if you really want it. In sleeping position, it accommodates three adults, or two adults and two children.
The kitchen cabinet is located at front, behind the front row, not on the right hand side.

It has standard Jakarta VW Campervan facilities; such as two portable gas stoves, a 220V refrigerator and sink. The customized roof rack can accommodate a roof tent, which additionally can add three more adults for sleeping.

The Mango campervan videos are also available in Youtube. Please click below links directly to see them:
Interior.
Exterior.
The bed.

This is a late post, but late is better than never; the wise man said. It was in September 2020 and after several months of “staying at home” due to the pandemic, we decided to go out for a quick camping for refreshing. The family did not join purposely, only two of us, accompanied by a German Shepherd.

The camping ground is so called Bukit Citamiang (i.e. Citamiang Hill), only around 60km away from South of Jakarta, towards Puncak. It is written as Citamiang Camping Ground in Google Map. Take the main road to Puncak and take a left turn in the Mega Mendung junction. It is only 6km away from the junction through a small road which it will be more winding and ascending as it goes deeper and higher. If it is your first time, then please follow the Google map direction closely. The tricky one is the last junction and followed by steep uphill road before entering the camping ground area. Generally the road is good for 2wd regular cars. Special precautions should be taken when you drive relatively a wide and large vehicle due to some sharp corners and narrow road.

That is a photography-story about Bukit Citamiang camping ground. It is unfortunately to hear that this camping ground is now temporarily closed. The good news is there is another camping ground just next to it, called Bukit Brader camping ground. The PIC is the same; Kang Dillah, WA +62 878 9570 0127. Please make sure you call him first before visiting the place.

I can’t remember exactly how many times I have done camping at Gunung Pancar. A friend of mine just bought a standard 1977 VW Kombi & wanted me to accompany him camping with his children (& his dog). So here we are, in June 2019, did another camping there.

This camping spot, ‘Lembah Pakis’ is the one that we like the most at Gunung Pancar camping ground. The field is flat, not too big. The toilet & musholla is very near by.

In the clear evening, we walked out the dogs & the children… 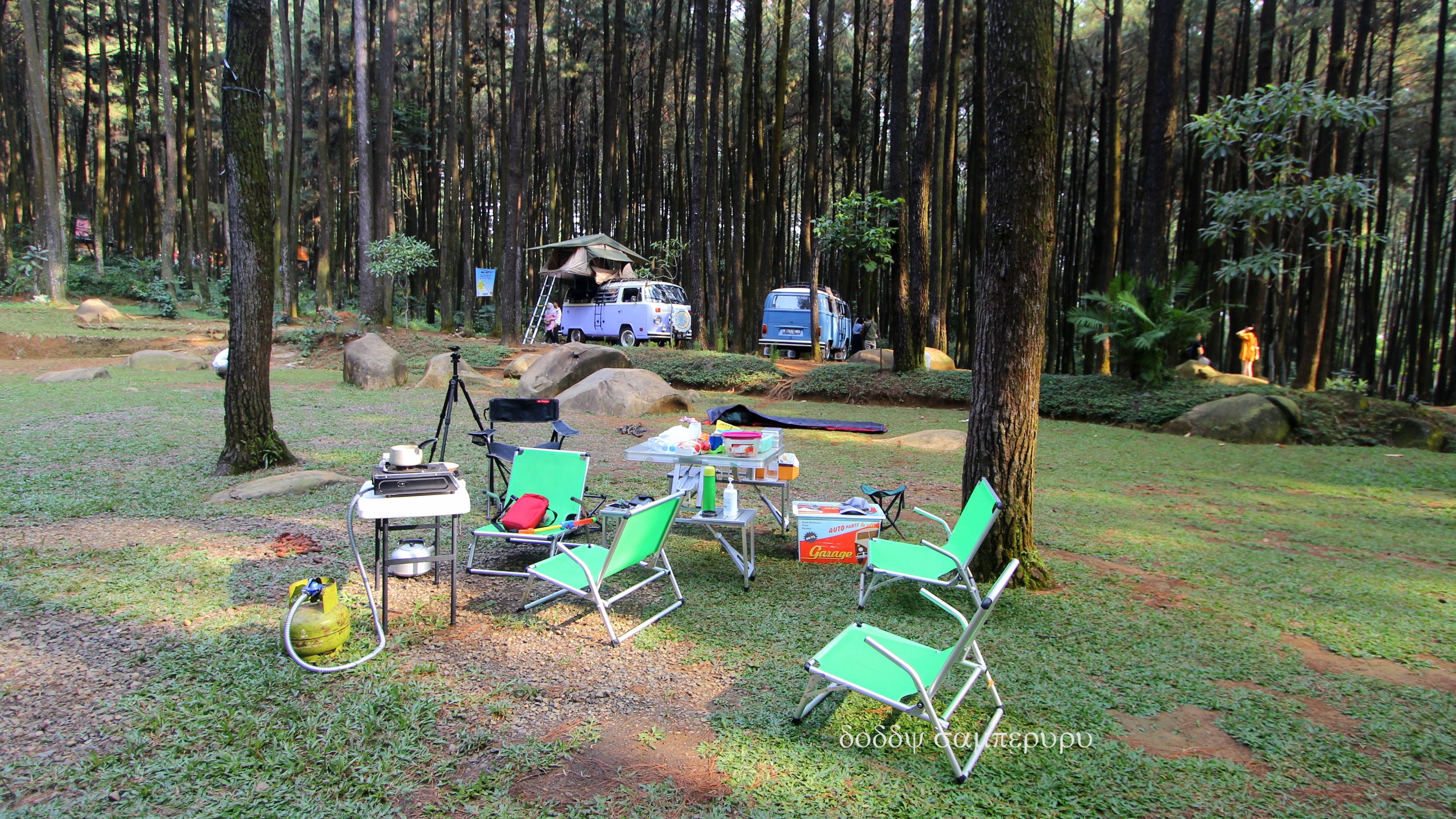 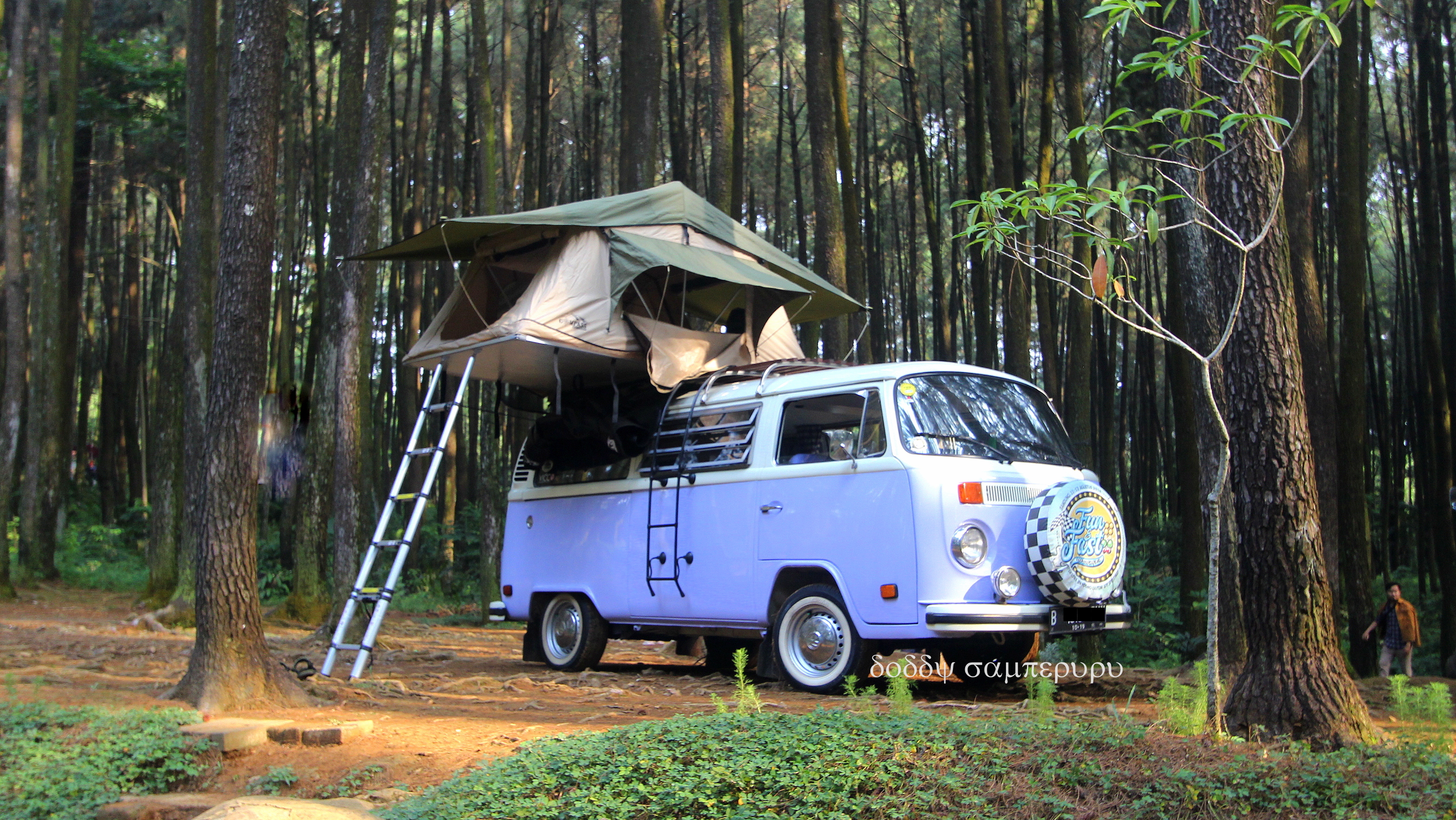 Gunung Pancar is the closest camping ground from Jakarta, about 1-1.5hrs driving, at Sentul area, Bogor. They open 7 days a week. Please visit the website to get more information.

Its altitude ranges between 770 and 1330 meters above sea level. Its fertile soil sustains about 2500 types of plants, consisting of 40 familia and 112 species.

The park was built by the Dutch colonial estimated in 1906, when they began digging a water tunnel for a hydro dam. The water plan was cancelled later, the tunnel was enlarged adding more rooms & became a military facility. Today the tunnel is so called Goa Belanda (Dutch Cave) & is one of the main attractions at Tahura park. The original tunnel is 144m long, 3.2m high & less than 2m wide in both entrances. However the total length now is about 550m including all alleys inside.

On July 2019, for the very first time, the park authority issued a permission to our group to camp just in front of the tunnel. It was possible because we also conducted the Jungle Night Trekking for the first time, as well. It was a quiet experience walking for about 3km inside the dark park, including exploring the Goa Jepang (Japanese Cave) at night time.

A good condition 800m long black top road is available from the entrance to the Goa Belanda. We drove in our campervan to access the camping ground.

Here are some photos:

Since it is located inside a protected forest, bonfire is prohibited. However toilets & musholla are available, including food stalls…

The Tahura was quiet by Sunday morning…

The campervan can accommodate up to four adults: two inside the car & two in the roof tent…

To camp just next to Goa Belanda using the Campervan & the Jungle Night Trekking are very interesting experiences. Please contact the Tahura Juanda management if you are interested to do the same.

Queen has represented musical vision and freedom through their pioneering and creative approaches to composition and poetic, on-point song lyrics. The band continues to earn new fans of all ages and backgrounds 48 years after their initial formation.

It has been a Bohemian Rhapsody fever here in this country. As a fans of Queen myself, since 1982, I’m posting these photos of our 1963 VW Beetle accompanied by quotes taken from Queen’s songs, lyrics or a comment. 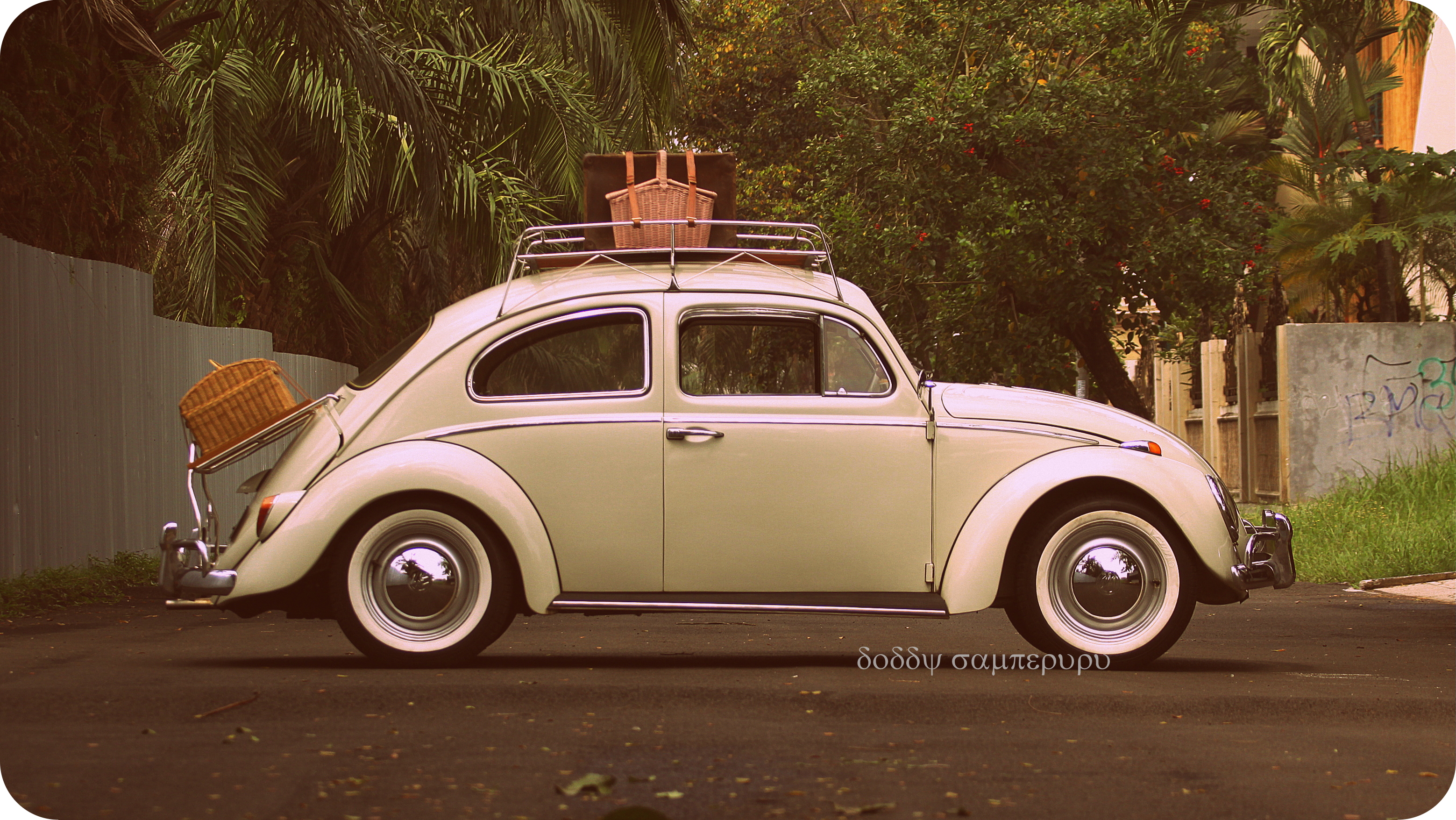 Is this the real life? Or this is just fantasy?
(The first lyrics from song Bohemian Rhapsody, album: A Night at the Opera, 1975).

“Can anybody find me somebody to love?…”
(A lyrics from song Somebody to Love, album A Day at the Races, 1976). 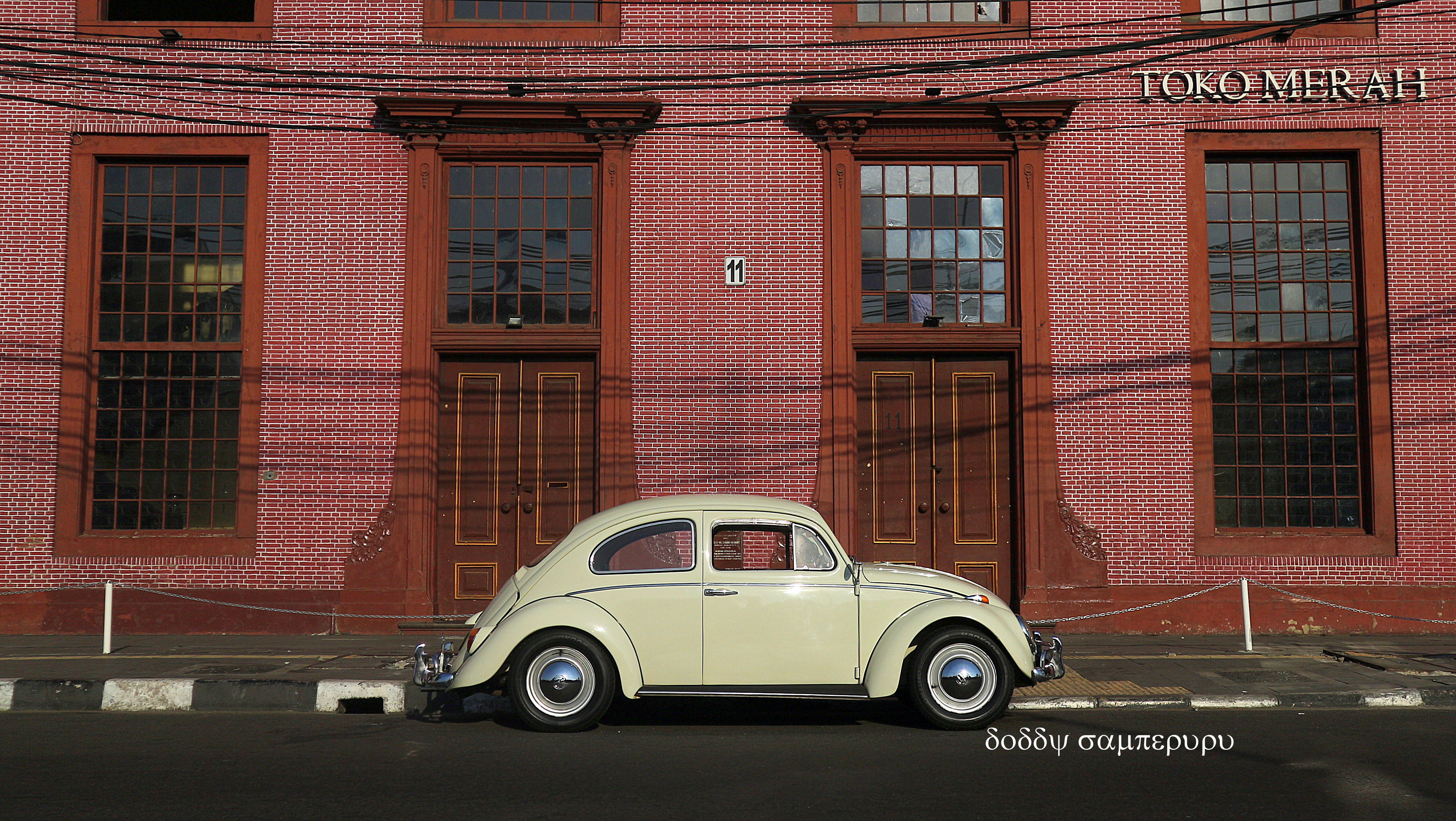 Loneliness is my hiding place. Breast feeding myself…
(A lyrics from song Life is Real (Song for Lennon), album: Hot Space, 1982, written by Freddie as dedication to John Lennon’s death). 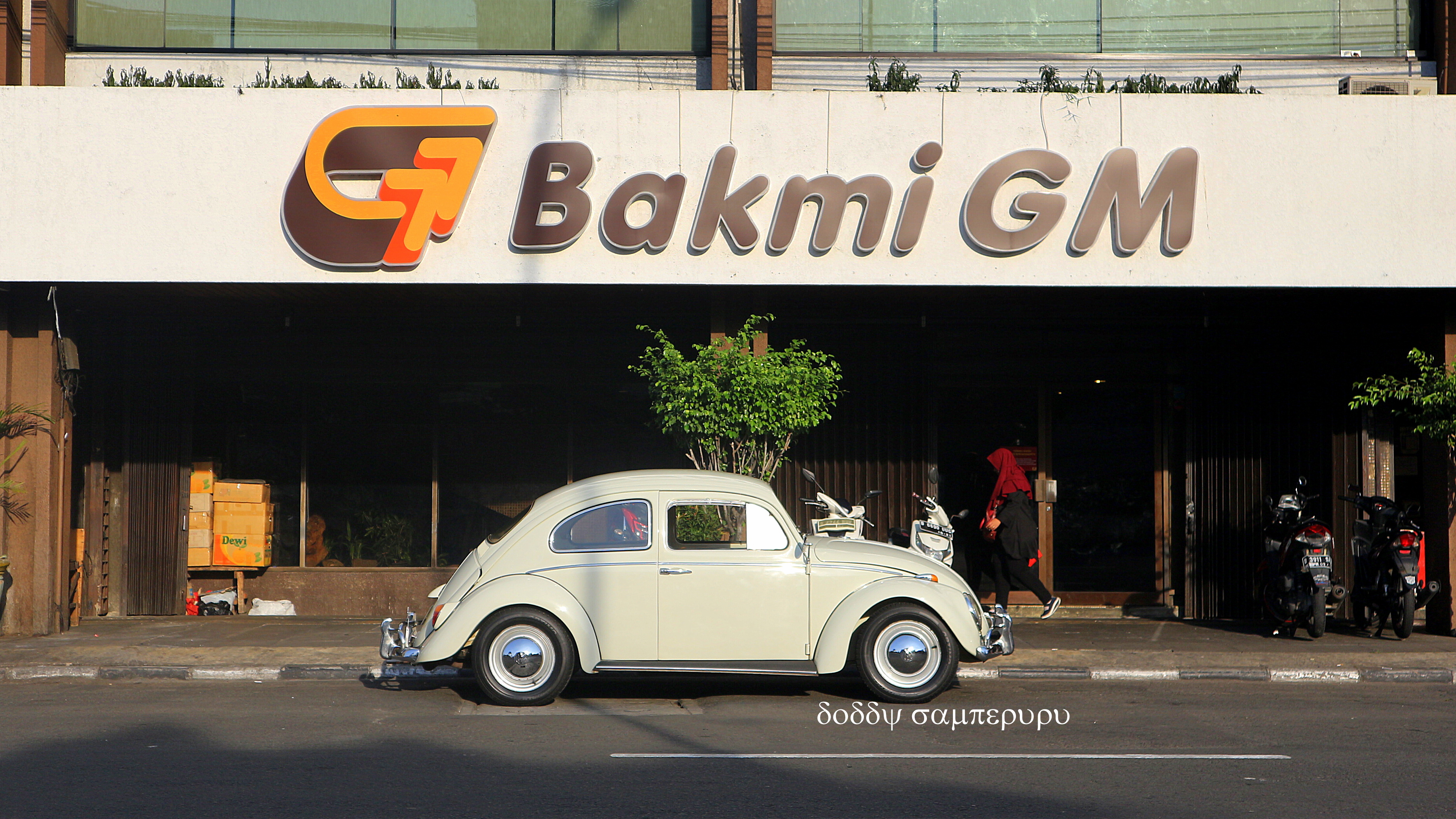 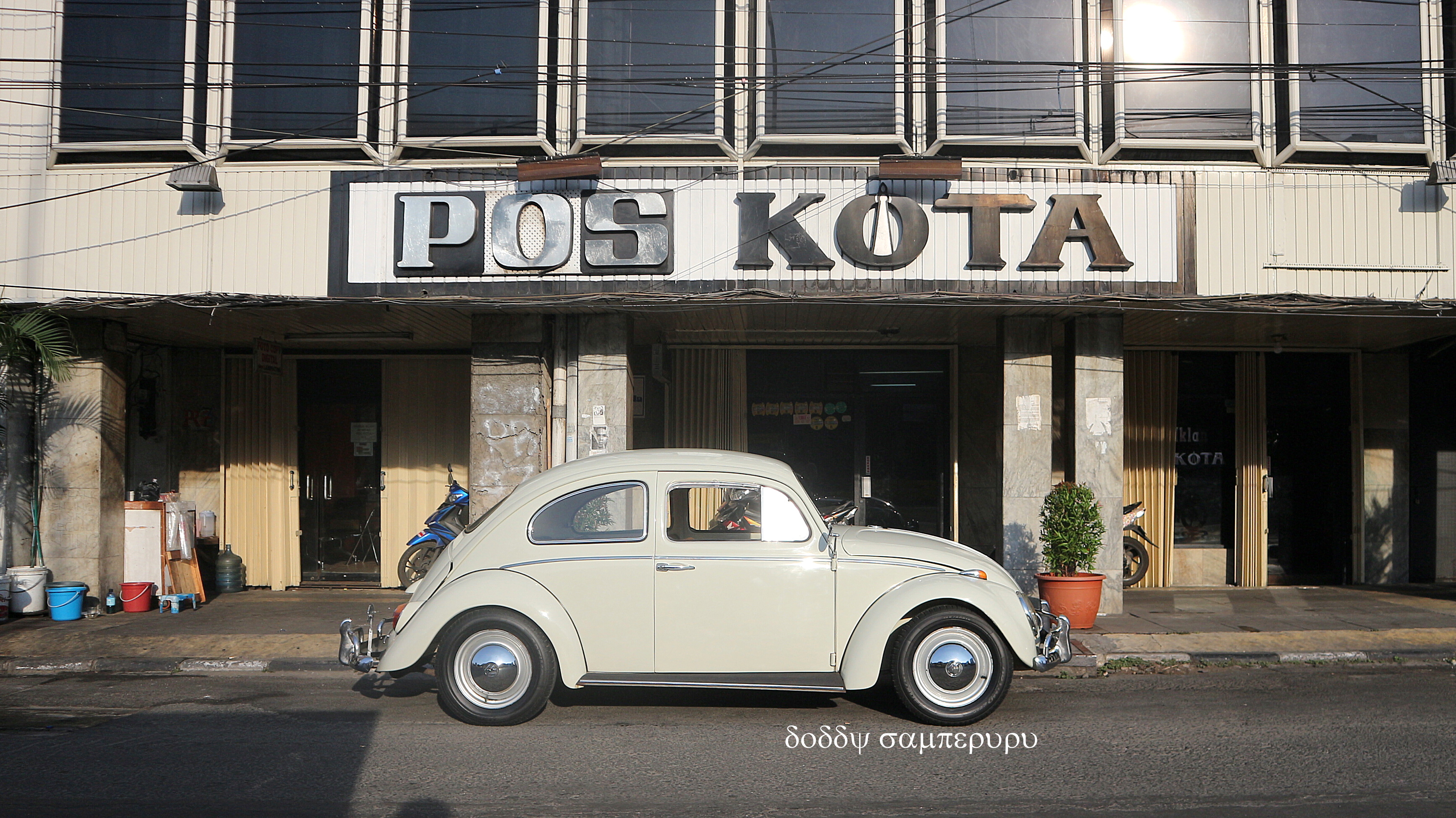 “Boredom is the biggest disease in the world, darling…”
Freddie Mercury 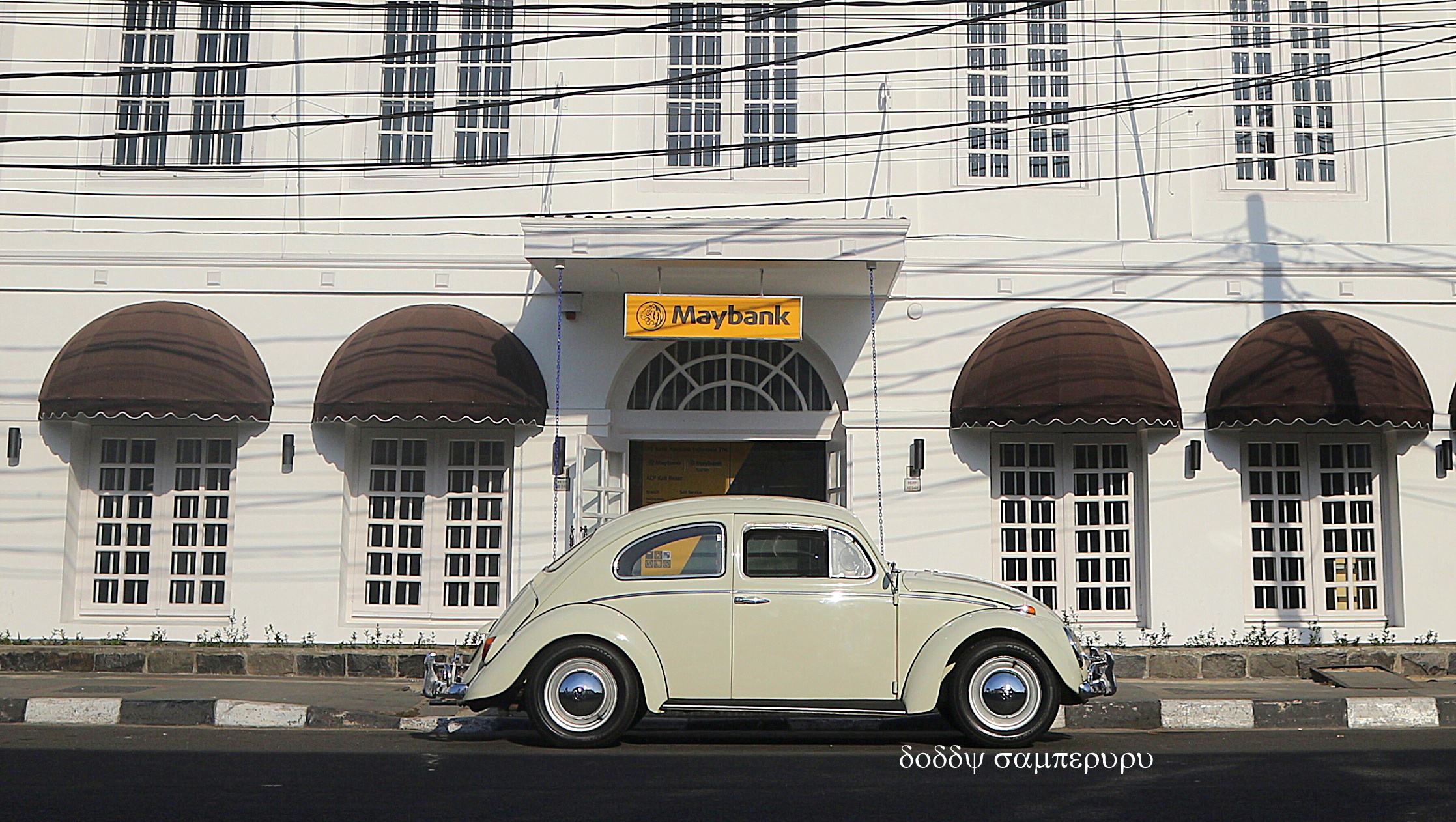 He is the Hitman, the great pretender, Mr. Bad Guy, just a poor boy, the invisible man.
He’s Freddie Mercury.

“Queen songs are not about the life of a rock star – they tend to be about the lives of normal people, which is why I think the songs connect so much with every generation…”
Brian May

“Spread your little wings and fly away..”
(A lyrics from song Spread Your Wings, album News of the World, 1977).

“I used to take a nap in a van & listen to Queen.
Over & over again, & drained the battery in the van.
Than we’d be stuck. That happened a few times.
We’d be stuck with a dead battery because I’d listened to Queen too much…”
Kurt Cobain

30 interesting facts about Volkswagen in infographic.

Two weeks ago, during the fasting month of Ramadhan, my friend & I went for a camping at Ciapus area, Bogor, about 65km away from Jakarta. This time, we drove our Volkswagen 1303 Super Beetle. I was by myself  & my friend brought his 3.5yo daughter & 6.5yo all-black German Shepherd.

The road is pretty much in good condition, though we had to pass some bad traffic areas & several hundreds meter of bad road. The camping ground elevation is about 400m, so not that hot neither that cold, by the foot of Salak mountain in the middle of pine forest. Good thing is, the cell phone signal is acceptable, so you are still connected to the world…

The toilets (squat type) & bathrooms are available with clean running water, spring water. The toilet is lit at night. Also, places for wudhu or washing your dishes are located in the same area, about 50m away from our tents.

Actually some shops are available there but all of them were closed during Ramadhan. When they are open, instant noodles, snacks & hot-cold drinks are available. Rice & heavy dishes only available upon request.

There is a pool on the nearby river where we can swim safely. The spring water is clean, clear & fresh. The size is about 10m x 10m. The deepest part is 150cm with rocks on the pool floor. The location is about 100m from our tents.

Here are some photographs with some famous camping quotes: 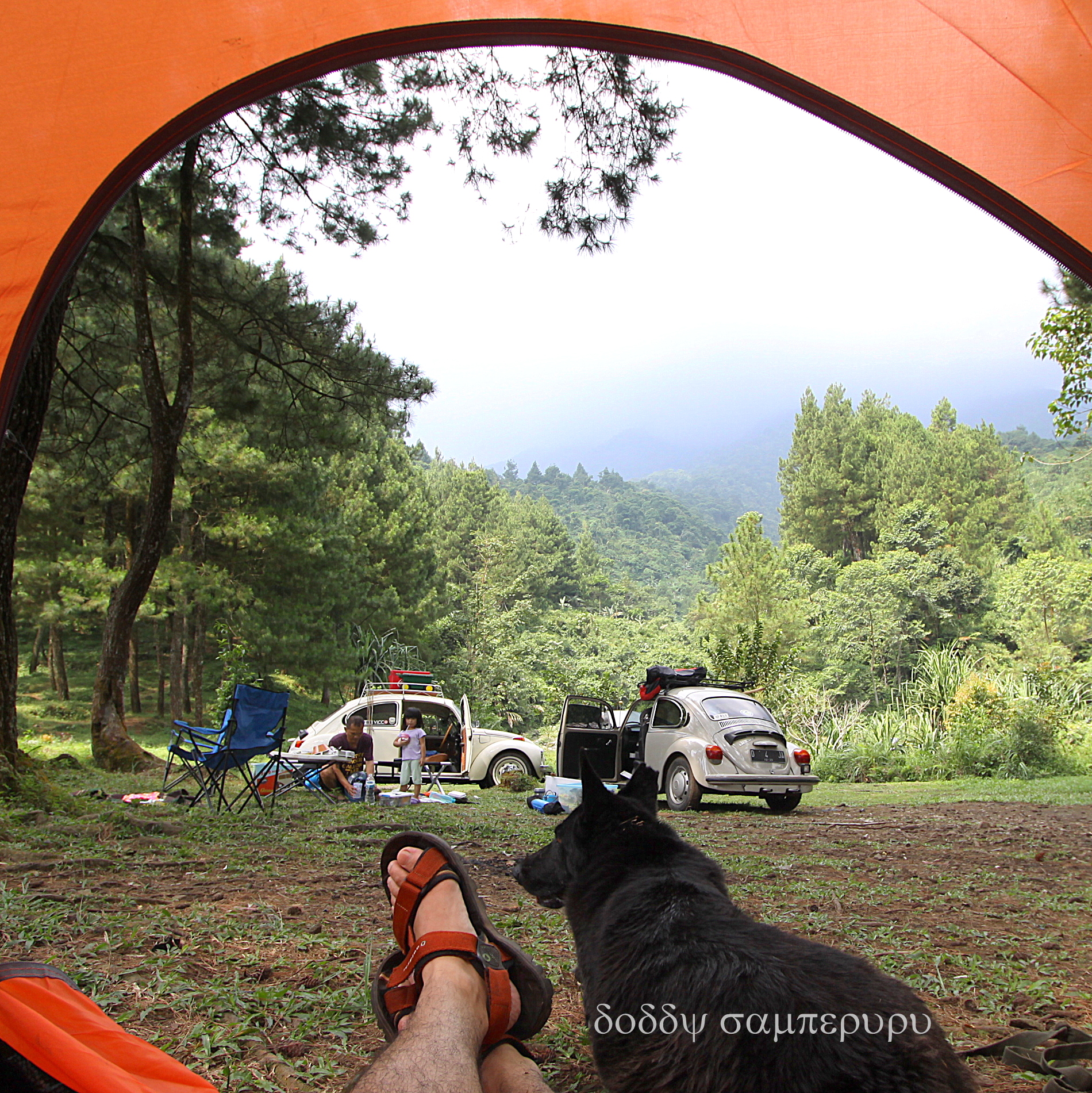 The view from my weekend motel. 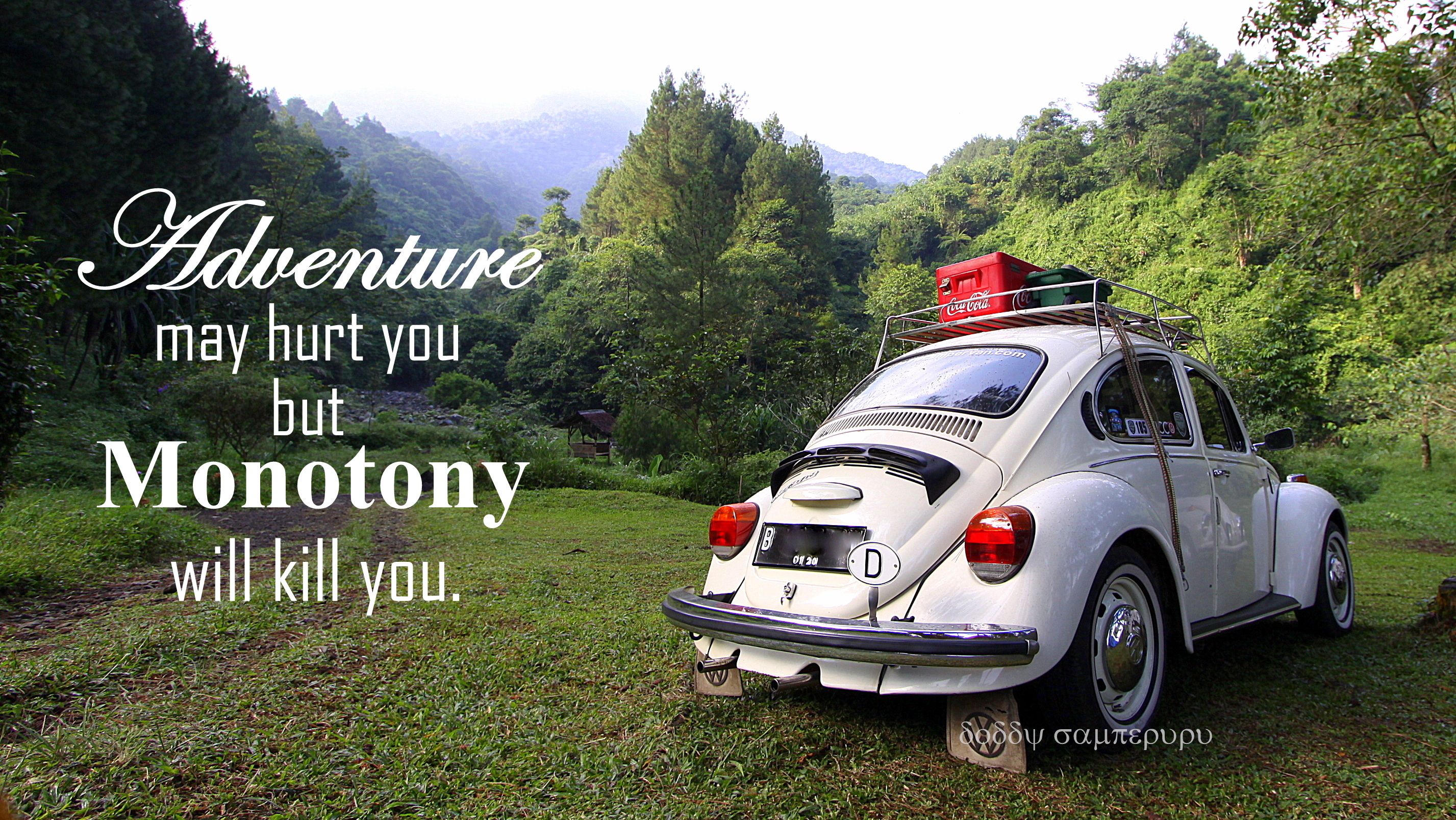 Our security – all black German Shepherd 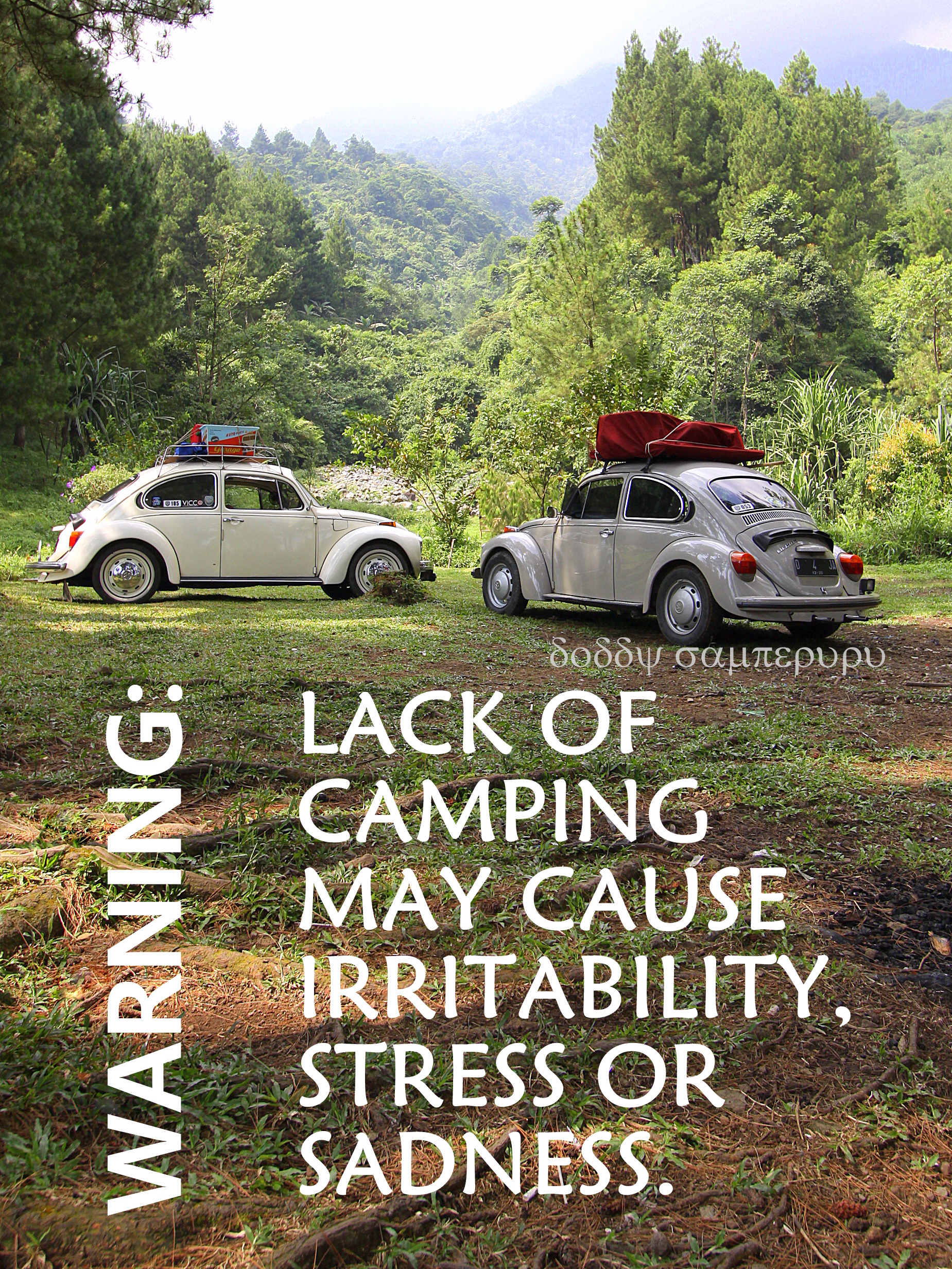 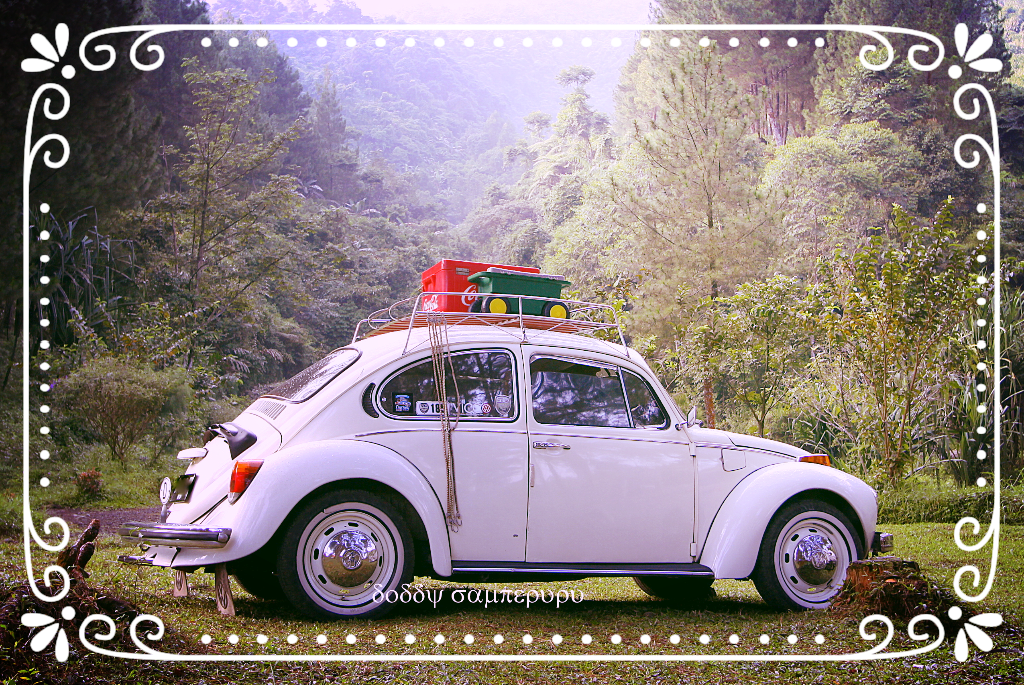 Last weekend, SBO (Super Beetle Owner) Indonesia community had an opportunity to visit an extra-ordinary the one-only place in Bandung, called Terror Garage. It’s a workshop, a shop, a personal gallery or you may call it an automobile museum, displaying rare, exotic & collectable Volkswagen & Porsche cars. Nobody feels comfortable to talk about the price, just enjoying the cars…

Here are some of the pictures to share, for your eyes only… 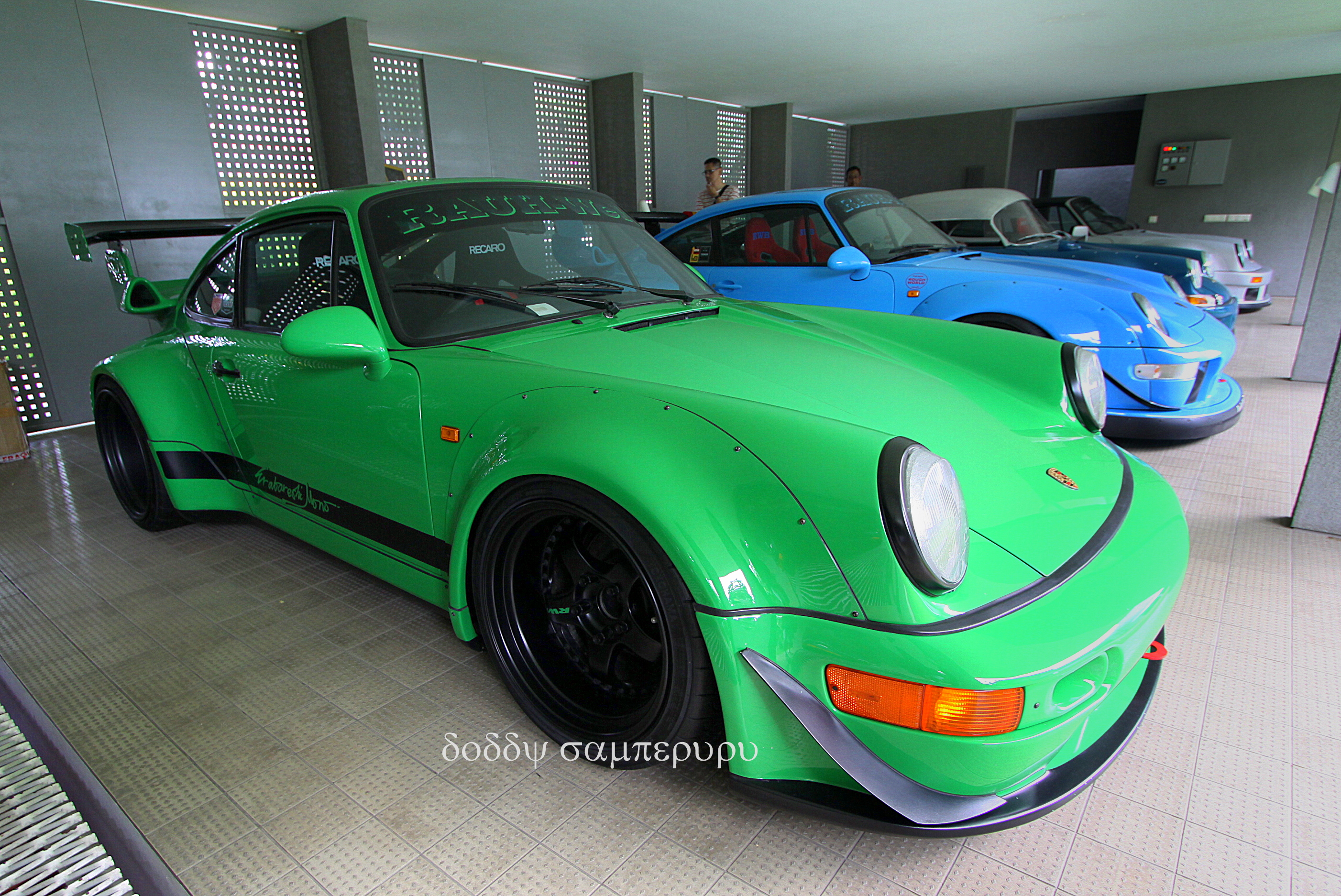 There are five Porsche on the ground floor; four are RWB custom & one is standard.

The Porsche 911 Speedster with a removable aluminium roof

The aluminium roof is designed & manufactured by Terror Garage, claimed to be the one & only in the world. 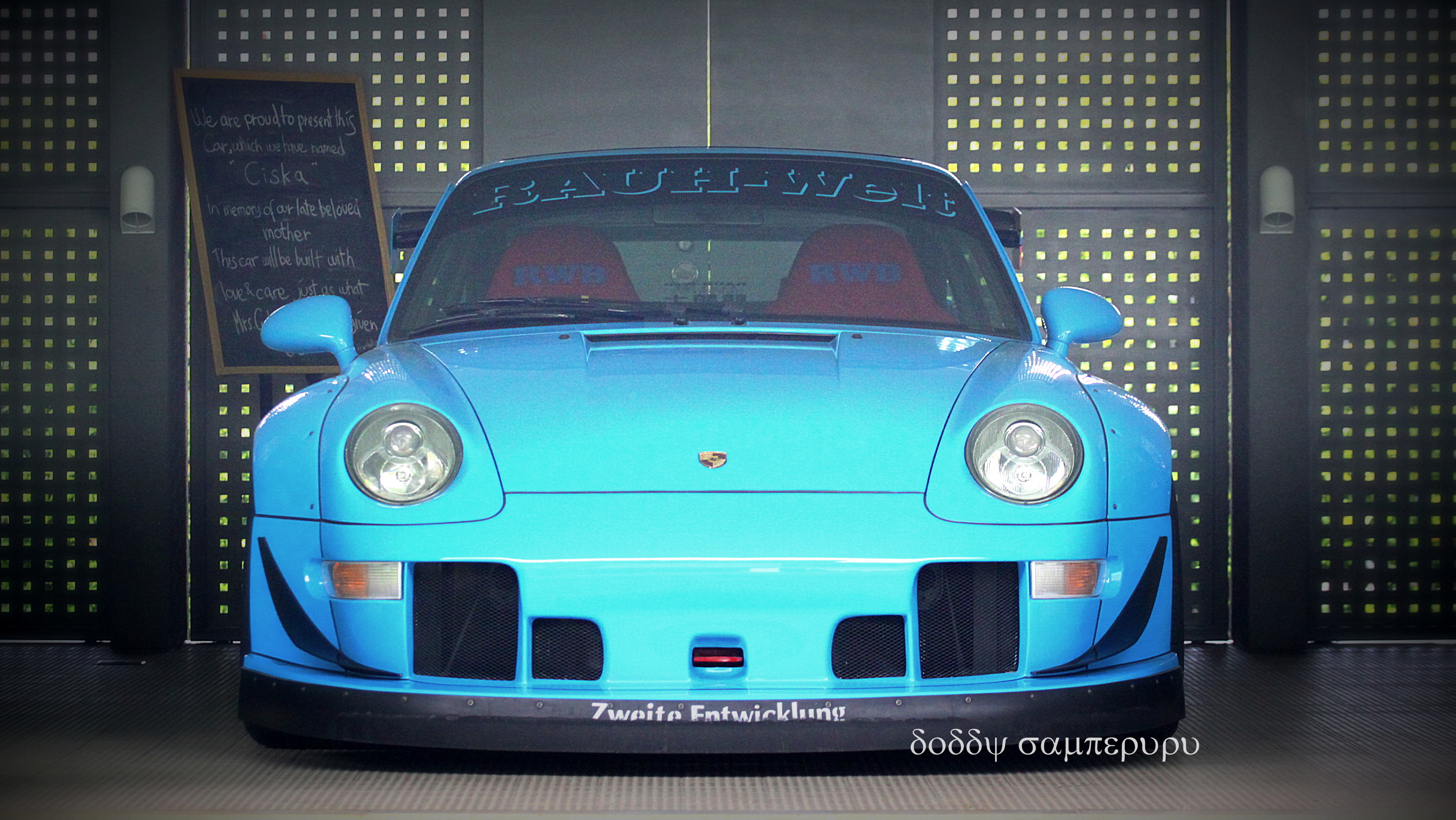 1954 Rometsch Beeskow (I bet you have never heard it before), a cabriolet made by Rometsch karosserie using VW Type 1 platform. There are only 32 confirmed survivors worldwide & one of them is displayed comfortably here. A 3rd seat was installed behind the driver seat, turned by 90 degree, facing sideways…

In total, there are 13 super high value cars here in the basement…

A very well built Volkswagen Type 14 Karmann-Ghia. There are two of them here. 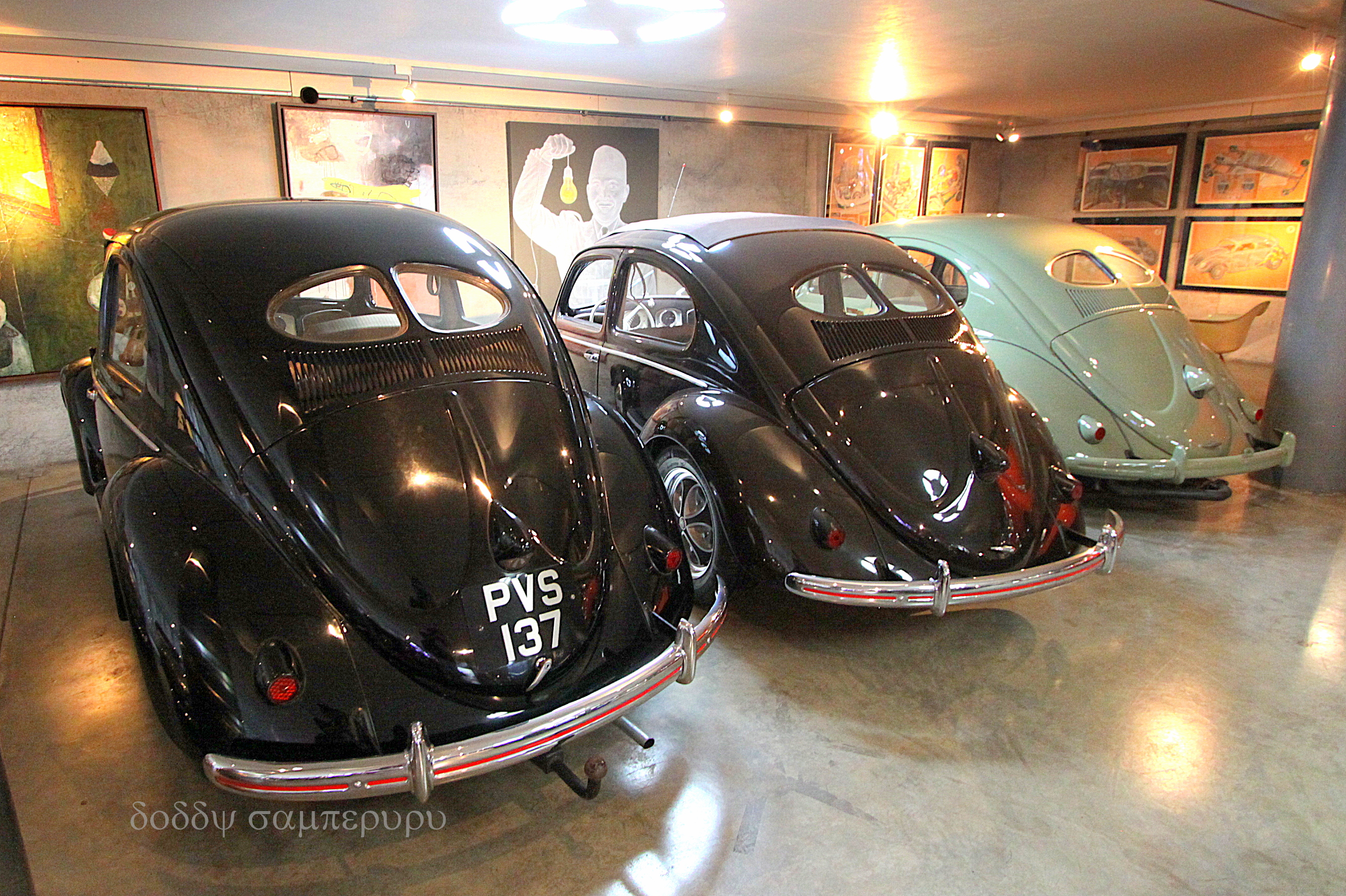 There are three Volkswagen Type 1 Beetle split-oval (1946-1952). The left one has an original paint with the original European license plate somewhere… 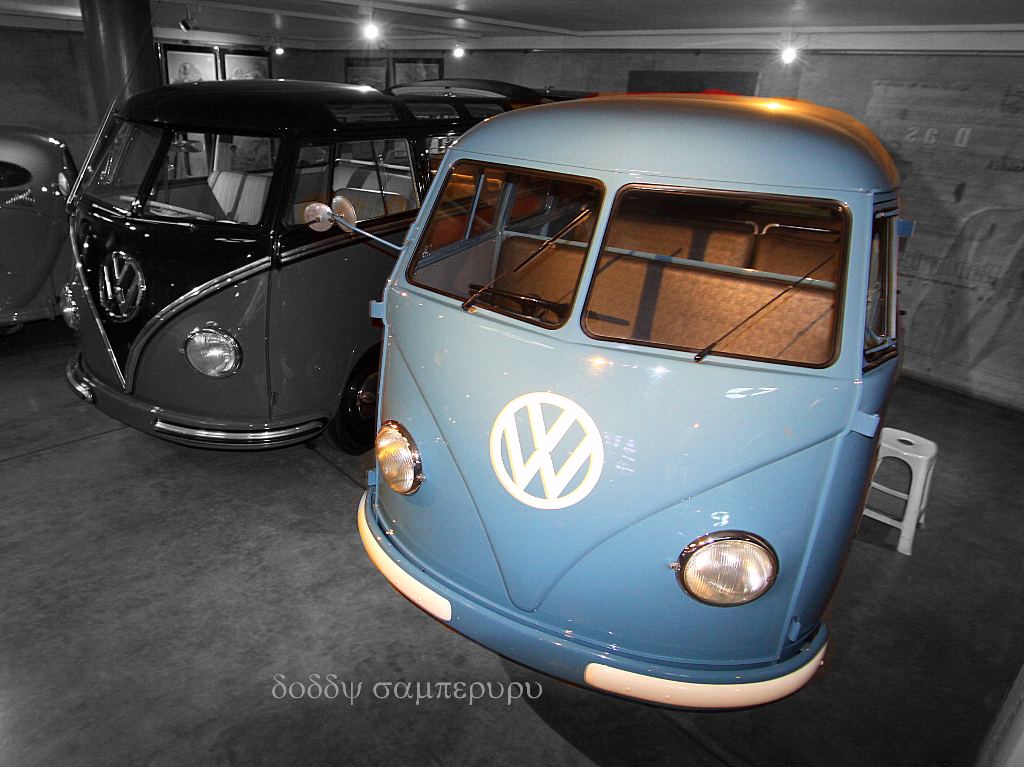 This is a Volksrod or Rodbug, a rod-style custom VW Beetle, & built from an Oval Beetle (1952-1958). Builder: unknown, but I suspect it was Terror Garage themselves…

I think the most unnoticed displayed car is this Volkswagen Type 3 (1961-1973), Squareback aka Variant…

The only Porsche displayed here is Porsche 356, the Porsche’s first production automobile (1948-1965), therefore it’s one of the most hunted by Porsche collectors in the world. This particular one is the Porsche 1500S (1500cc engine, Luxury version).

The owner of Terror Garage is also a collector of VW & Porsche diecast models. There are more than 1 thousand pieces in this rack… 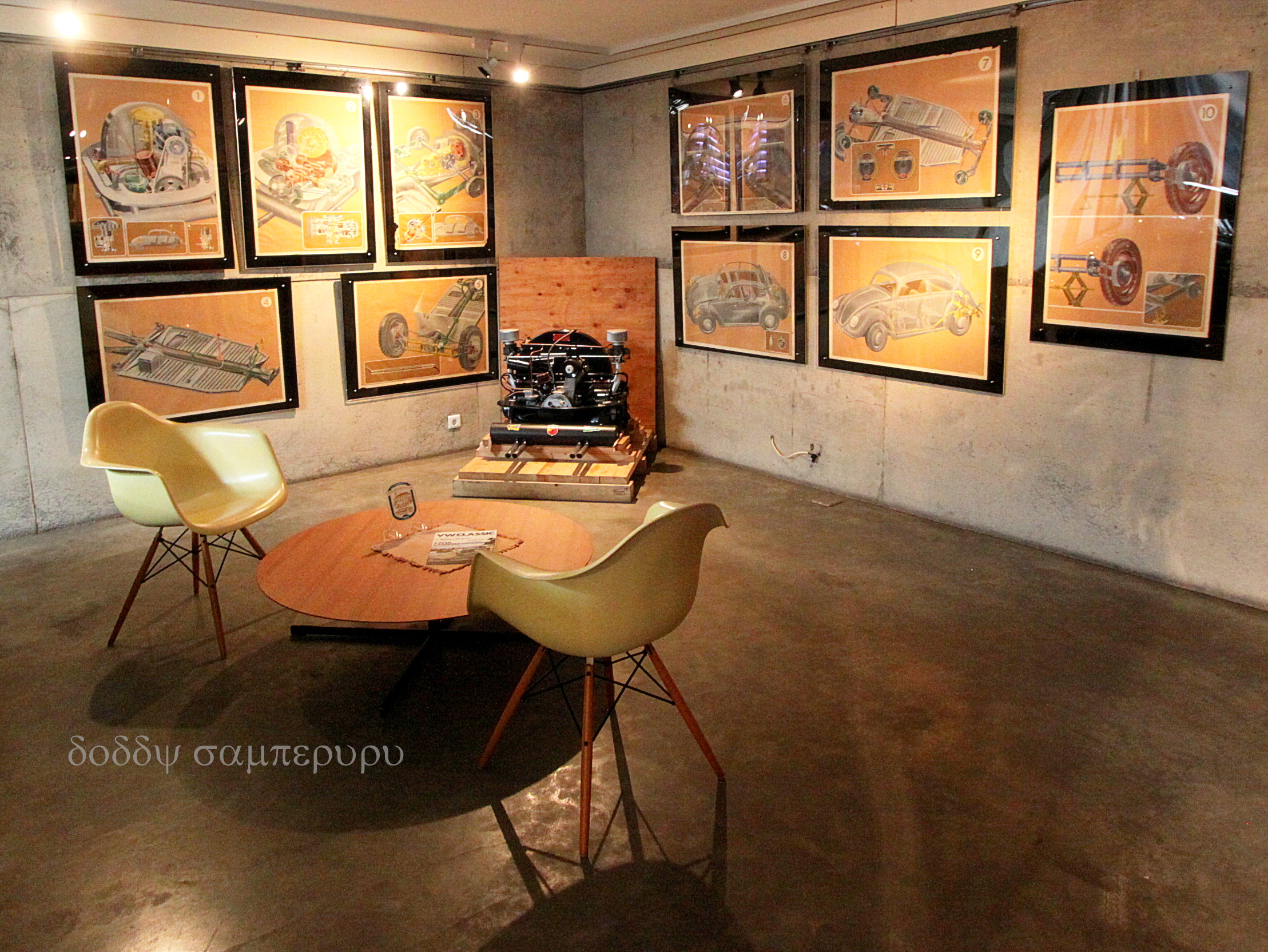 One cozy corner in the gallery 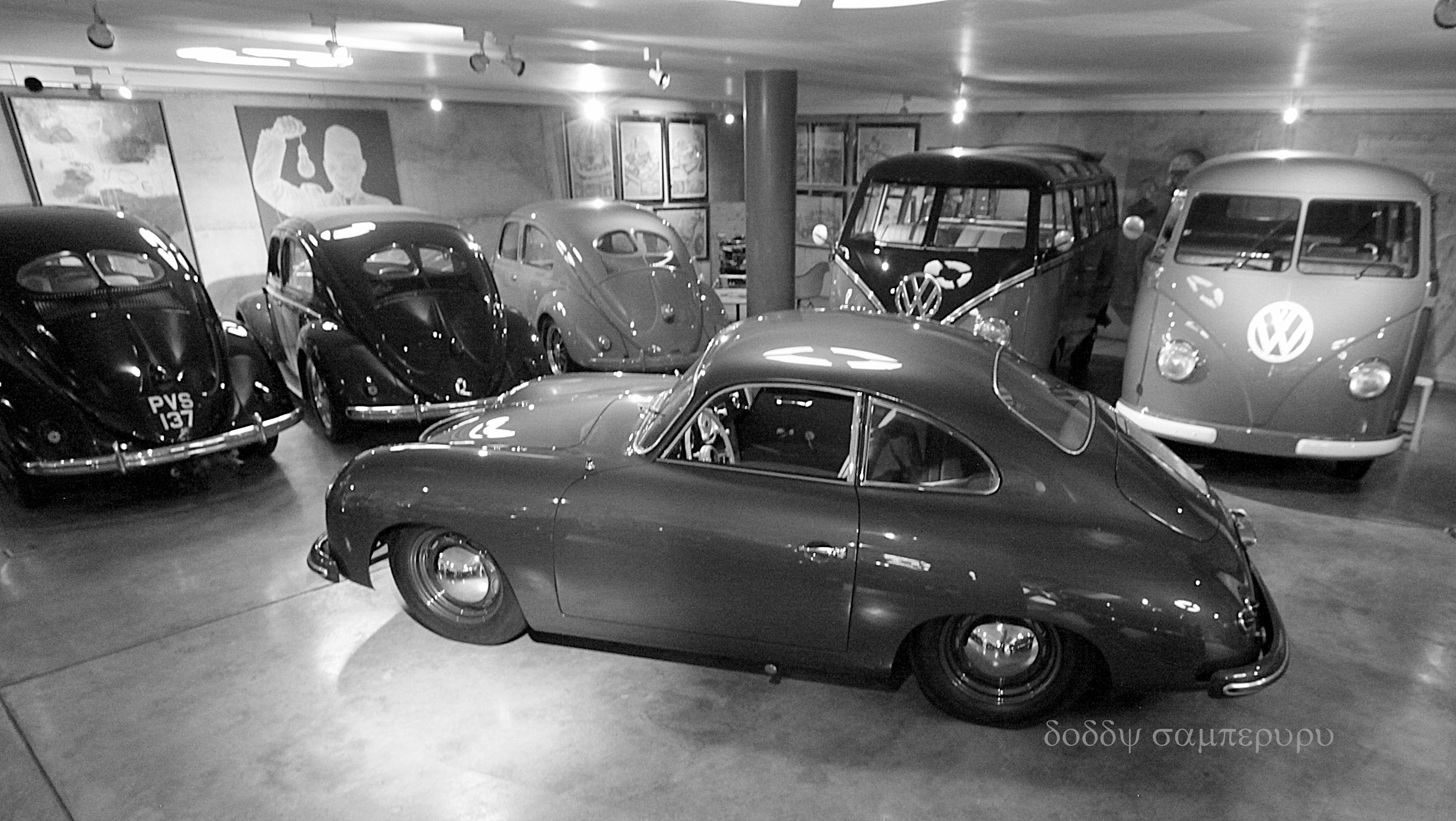 Get your calculator & start estimating the value of these six piece of fine German metals.

One high-value property is this Tempo Matador, the only one available in the country. Tempo Matador is built by Tempo company in German using a front mounted 25HP Volkswagen 1100cc motor & front wheel drive. 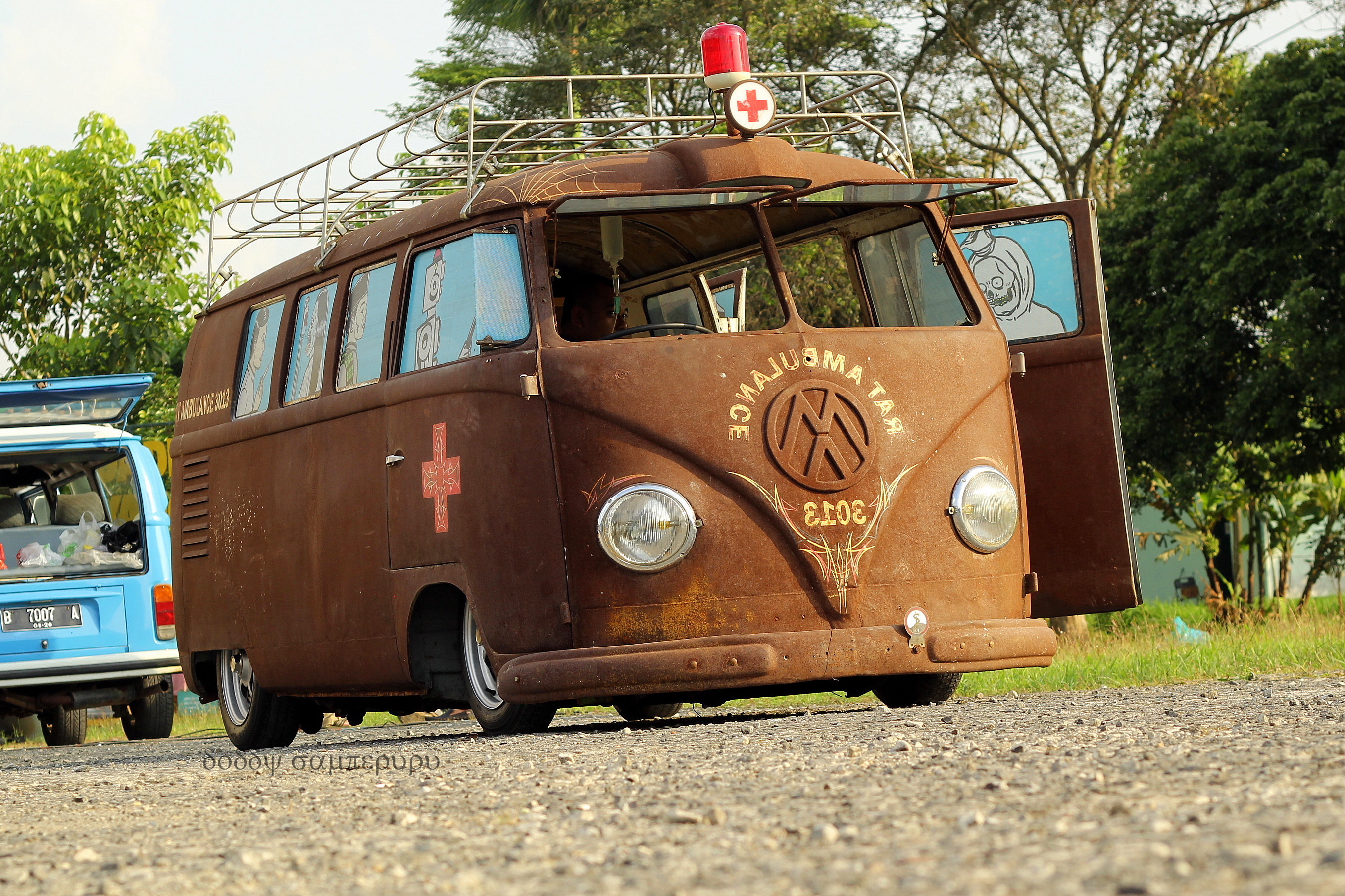 A Barndoor ambulance in rat style.

Unfortunately the gallery is not open for public. Nevertheless, the owner of Terror Garage welcomes for any VW clubs or communities to visit by appointment.